Sierra Leone remains among the world’s poorest countries, ranking 180th out of 187 countries in the Human Development Index in 2011. Decades of economic decline and 11 years of armed conflict had dramatic consequences on the economy.

Poverty remains widespread with more than 60% of the population living on less than US$ 1.25 a day and unemployment and illiteracy levels remain high, particularly among youth.  However, Sierra Leone has made considerable progress since the end of the civil war in 2002, consolidating peace, democracy and improving development indicators amid rising rates of economic growth.

Clare  says, “When we arrived in Makeni, north of Freetown, we were struck by its beauty despite the chaotic environment and harsh surroundings.”

The Street Child of Sierra Leone (SCoSL) Children’s Centre sits at the edge of town and provides educational and medical support to around 150 children. This sector of society is the most vulnerable, many of whom have lost their parents during the war, and they live on the streets of Makeni in one of the poorest counties in the world.

Despite Sierra Leone’s important progress in consolidating peace and strengthening democracy since the end of the conflict in 2002, it places low in the human development category, ranking 180th out of 187 countries and territories. While life expectancy has increased from 39 years in 2000 to 48 years in 2012, around 60% of the population lives below the national poverty line.

Working  together: Clare George-Hilley and volunteers in Africa

Although Sierra Leone has experienced positive economic growth in the past decade, the country remains heavily dependent on aid, with about 50% of public investment programmes financed by external resources. Inflation remains high due to internal factors and external disturbances, including rising food and fuel prices. Despite improved domestic revenue mobilization, including through the introduction of a goods and services tax, the fiscal deficit widened in 2011 due to a higher wage bill, fuel subsidies and spending on infrastructure projects.

“As part of Project Umubano we are running the summer school programme that aims to prepare the street children to enrol into schools in September,” she says.

In order to achieve this goal, we have been teaching subjects ranging from Maths to English and Social Studies. After our first six hour day, the whole school came together for a debrief. Many of the children expressed their gratitude and thanks for our help in teaching these subjects and for the effort that we have all made to visit them from the UK,” George-Hilley added.

The youth population, aged 15-35, comprises one third of the population of Sierra Leone and youth unemployment was a major root cause of the outbreak of civil conflict in Sierra Leone. Approximately 70% of youth are underemployed or unemployed and an estimated 800,000 youth today are actively searching for employment. 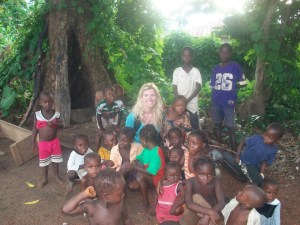 Cause for concern: students during the school break

Furthermore, illiteracy remains a persistent challenge and youth that lack that skills and education find it extremely difficult to compete for the limited jobs available.

“The energy and thirst for knowledge amongst these children has impressed and touched us all, their curiosity and enthusiasm is humbling to say the least. These children have many problems ranging from the lack of food and fresh water to the threat of malaria and other life-threatening diseases. They lack the funds for basic necessities, as well as school fees, which will be provided by SCoSL once the school term begins in September,” says Clare.

“The summer school aims to assess the level at which the children will re-enter education,” she concludes.

Clare George-Hilley as a director at the Africa Accelerate Project and the Colloquium think tank.